Public Safety as a priority 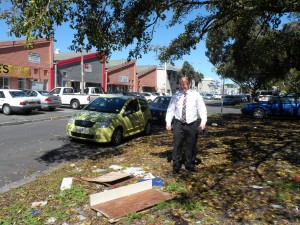 Mr Roy Kemmis-Betty of Pres Les, Chairperson on the GCID Board inspects dumped litter near Garfield Road before operations start

The vision of the GCID is to create and maintain a clean and safe urban environment in support of the business activities and the property investments in the area.

The Glosderry CID Steering Committee appointed Geocentric Urban Management as the management company for the area and Zonewatch at the Public Safety service provider.

As the incoming Glosderry City Improvement District (GCID) Management we would like to take the opportunity to introduce ourselves to you.

Geocentric and Zonewatch deployed to the Glosderry CID area on 2 September and initiated operations. Since starting operations much has been achieved in the area. It is worth mentioning that before the GCID started operations the Glosderry area was known for many problems including incidents of crime, illegal dumping and littering and various social issues including vagrancy and associated anti-social behaviour.

The implementation of the GCID was based on the efforts of the GCID Steering Committee spearheaded by property owners in the area. Now, eight months later we can report on many of the achievements in this short period of operations.